Home / FORECLOSURES ARE DOWN

Well, here is some good news, according to RealtyTrac foreclosures are at the lowest point in five years. Delinquencies are also dramatically down. Simply, this means that the real es- tate trend is truly on the rise. In support of this, I have spoken with several real estate people who are saying that the trend is definitely upwards. They are seeing greater activity with strong buyer reaction. The larger the buying market, the greater the movement of real estate values rising. Clearly, competition is the key. The greater the competition the higher the value structure of real estate. The retardant to housing prices is the lack of demand by the non-investment buying market. What we have been experiencing over the past 4 years is the lack of true competition in the housing market. The investor buying market is best likened to the vultures cir- cling the dying in wait of that final breath. Remember one thing, the investment market is not concerned with the health of the real estate market, just it’s own financial benefit.

An example of the investment market being totally unconcerned for the benefit of the real estate market and the general public which comprises it is a tax appellant who was chastising the township in which his condo is located for not paying attention to the run down condition of his property which he has owned for 20 + / – years. He repeatedly advised the tax board of the cost to replace the various mechanicals and short lived items ( which he had no idea of which they are). He had the photos to prove his case. It was all very interesting as long as you knew nothing about real estate values. The short lived items are those which the public is respon- sible to maintain as owners of a property. The conclusion was interesting. In his last statement he finally dis- closed that he owned the property but never lived there. It is a rental for which he was receiving a good rent despite the “poor” condition of the property. Yes, the condition for which he is responsible. It just doesn’t compute that the township or town or city tax payers should compensate someone for the lack of care for which the owner is guilty when a property is a rental. There is a case for considering the condition for a prop- erty that is owner occupied. This is one of several injustices perpetrated by unscrupulous property owners.

WEALTH IS BUILT AND THEN MAINTAINED- With all the election gibber- ish we are subjected particularly when it comes to “who should be taxed”, here are some interesting statistics. Forbes recently printed its 2012 list of the wealthi- est people in the world. The entry amount is $1.1 billion. There are 400 people who made the list. The combined net worth is $1.7 trillion up from $1.5 trillion in 2011. Realize that the top 400 wealthiest people can’t scrounge enough money to pay about 1/10th of the U. S. debt. Wow!!!

Here is a very interesting fact particularly for those politicians who think being wealthy is a curse and demands they pay a much larger share of their holdings than all others. Over 70% of the top 400 earned their wealth from “SCRATCH”.

TIGHT INVENTORIES IMPACTING HOME PRICES- The National Association of REALTORS, has been stating that there is strong evidence that lesser inventories in some locations has had a positive impact on median home prices. This stands to reason. The lesser the inventory the demand becomes more prevalent, thus, house sale prices rise because as said earlier, competition is now in play. This past week, the California Association of REALTORS, has confirmed that this is now the case in that state. Its statistics show that home sales have declined but the positive affect is the prevalence of higher home sale prices. So, it’s not a phenom- ena or a statistical anomaly; it is the application of “competition” . When there is demand for a product and there is a paucity of supply, the value of that commodity will rise. The key to this occurrence is balance. As a wise man once told me, “everything in moderation”. Yup, Pop, you were right again.

INTERESTING STATISTICS- The following reflect some interesting facts but they need to be placed in per- spective. The increase in home loan modifications and short sales is on a steady rise, but that’s not really what you are seeing. Based on the excessive time needed to complete a modification and / or short sale, the rise in the recent couple of years is based on the applications of up to 2 – 3 years prior. So, the system shouldn’t be patting itself on the back for it’s exemplary work. It was very flawed and apparently there is still some serious doubts as to it’s responsiveness. But it does reflect something positive. Families have been able to preserve a good portion of their credit for future real estate and other investments or needs. And, new families have been able to find affordable housing and each sale brings with it an increase in capital improvement purchases and labor needs. So, we are on the right track and we must hope it continues. 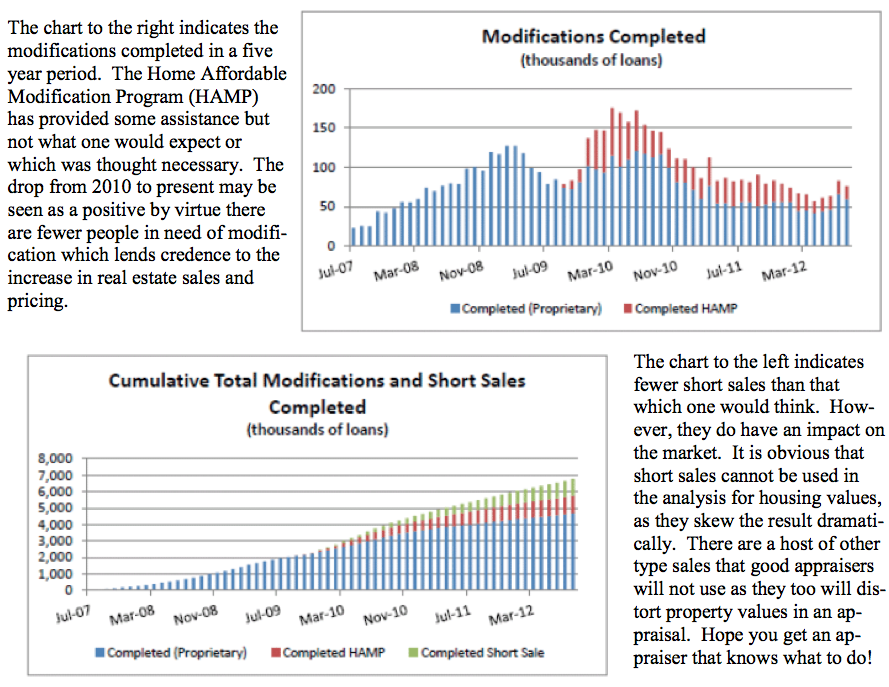 THE TIDES OF REAL ESTATE!

DOWN IS NOT NECESSARILY DOWN

WHEN IS A GOOD TIME TO SELL YOUR HOME?